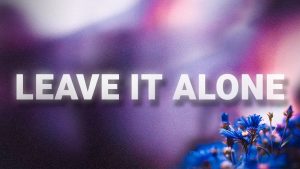 My feet hit the floor each morning, and a new day starts.  My first activity, often before anything else happens—I write my “To Do” list for the day.

I’ve barely rubbed the sleep from my eyes, and I’ve already created a highly orchestrated, perfectly thought-through 12 hours of work.

This might be the way you start your day, too.

I was talking to one of my friends about these To Do Lists.  She’s a Capricorn, and nobody does a list like a Capricorn.

She had an idea she wanted to run by me…something she felt would not only make her day better and more sane, it would make her business easier and simpler.

Her “To Allow List” would hold the things she would just let happen, things that could unfold at their own speed and direction.

On her “To Allow” List would be those things she would not try to control—sort of the opposite of her To Do List.

Wow…a controlled list of things you weren’t going to try to control!!

Here’s what gave her the idea.

She had a contractor working for her who she just felt wasn’t doing what he should.  As a good Capricorn, she just knew she had the “right” way, and his approach was driving her crazy.  She was torn between whether she should do nothing or report him to the project lead.  Talking to the project lead was on her “To Do”.

Instead, she made the entry on her “To Allow” List.  She would allow him to do what he was doing, to let it unfold.  And she was rewarded.

Several days later the project was complete, and it looked great.  He really knew what he was doing all along, just not how she would have done it.

This holiday season rather than trying to control and manipulate everything (and certainly this has been a year where we’ve discovered we have a whole lot less control than we thought), take a look at some things you should just “allow” to happen or not.

Hey…give it a try right now.  Write down one thing you’re going “To Allow” to unfold the way that person or event intends.

Write down one thing you really don’t have to push through today.  You’ll give it some space, let it have legs of its own.

You’re going to actively choose “To Allow” it to happen.

Here’s what I’ve discovered about adding a “To Allow” List to my day—I’ve recognized not everything should be in my control.  Many things have their own path and a better one to boot.

And, frankly, it’s kind of fun to let go and just see what happens (sometimes).

As you get adjusted to this new muscle, can you gift it to yourself another day?

Starting with just one thing until you’re comfortable with a “To Allow” in your life.

What will you Allow to unfold today?