A Source of Inspiration 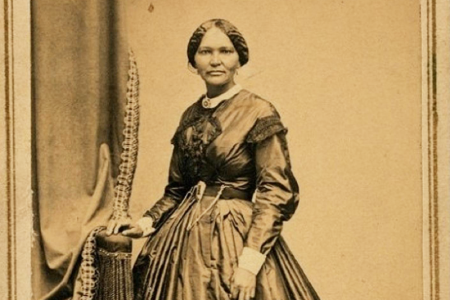 Who do you look to for inspiration about your business? Friends, family, famous people?

Recently I came across the story of Elizabeth Hobbs Keckley and it inspired me in so many ways.

Born into slavery in Virginia in 1818, Elizabeth was moved from plantation to plantation, sold from owner to owner. When she was still a teenager, she began building a clientele, making dresses for both white women and freed black women. Elizabeth learned her sewing skills from her mother. Who knew it would be those skills that led her from the plantation house to the White House?

I am inspired by Elizabeth’s vision and her courage. When she started her dressmaking career, most (if not all) of the money she earned from her work went to the family who owned her. That might have discouraged many people, but it didn’t deter Elizabeth.

In 1855, a full 8 years before the Emancipation Proclamation, Elizabeth took a risk on herself by buying freedom for herself and her son. She was able to do that by accepting loans totaling $1,200 from some of her best clients.

Talk about your make-or-break moments! On her own with a young son, Elizabeth needed to make enough money to support the two of them and repay her debt! No guaranteed salary, no business broker, no mentor or role model…just her skill, her determination and her reputation for excellence.

Making a success of her business, Elizabeth repaid her patrons and relocated from St. Louis to Washington D.C., where her creations caught the eye of a very important client…first lady Mary Todd Lincoln, who hired her as her personal dressmaker in 1861. She later became Mrs. Lincoln’s personal companion, confidante, and traveling companion.

I’m amazed and inspired at how Elizabeth pushed out of her comfort zone again and again, especially considering she was doing so in a time when few women, let alone Black women, were running their own businesses.

If the story stopped here, Elizabeth would have earned her place in the honor roll of inspiring women business owners, but there’s more.

Keckley was determined to give back to the community and created her own charitable organization, the Contraband Relief Association (later the Ladies’ Freedmen and Soldiers’ Relief Association), an organization that raised money and provided food and clothing for Black people and wounded Union soldiers.

She also became an author, publishing her autobiography, Behind the Scenes, Or, Thirty Years a Slave and Four Years in the White House in 1868. The telling of her story cost her dearly. Mrs. Lincoln viewed the book as a betrayal of her confidence and her reaction rippled through Washington society, making Elizabeth an outcast.

Here’s yet another reason to admire Elizabeth…her amazing resilience and ability to reinvent herself. In the aftermath of her loss of status in Washington, Keckley accepted a position at Wilberforce University in Ohio as head of the Department of Sewing and Domestic Science Arts.  Keckley also organized the dress exhibit at the 1893 Chicago World’s Fair.

Such a journey! From slave to free Black woman before the Emancipation Proclamation. From private dressmaker to personal companion to the First Lady. From published author to outcast to college professor.

Vision, courage and remarkable resilience. A successful woman committed to giving back to her community. All this in addition to being a talented designer and dressmaker.

Elizabeth Hobbs Keckley is a source of inspiration for me and hope for you as well.

Who are your own inspirations? Who is inspired by you?

Find an inspiration that will encourage you to…

…Go forth and do great things,