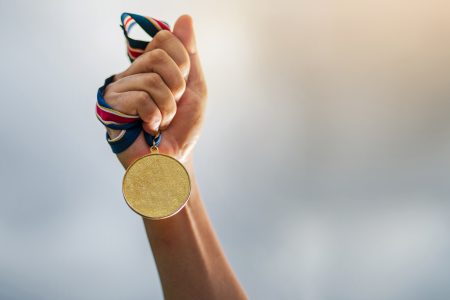 We’re headed into Olympic season. You can tell because more and more TV ads are appearing with athletes as the stars.

It makes me wonder what those champions are thinking right now. Here they are, headed into an Olympic competition that should have happened last year. How did they deal with the let down of last year’s cancellation? How are they gearing up to be in top form at just the right time this year?

One thing is for sure: They’ve kept their eyes on the prize.

To reach any goal, you have to be able to see it clearly. In every tiny detail. Without diverting or deflecting your attention.

You might have heard a version of this story somewhere. Here’s how I heard it.

An Olympic gold medalist was speaking to a room full of athletes who were all hoping to land a spot on the Olympic team. Without giving them any test of their skill, he said, “I can predict which of you will actually land on the team.”

He went on to ask, “How many of you have set a specific goal for your performance in the trials…not just where you will place, but what time or distance it will take to get you there?”  Most of the hands in the room went up.

Next question was, “How many of you have written that goal down at least once.”  Fewer hands.

Final question: “Who has that paper with your goal in your pocket with you right now?” Only one hand was raised.

“Congratulations,” said the gold medalist. “I’ll see you standing on the podium.”  And of course, the prediction came true. The person with the paper was Bruce (now Caitlyn) Jenner, winner of the gold medal in the decathlon in 1976.

Having his goal in his pocket every day kept Jenner focused on where he was headed. Any time his attention wandered, all he had to do was take a look at that piece of paper.

It goes without saying that being skilled at his sport was also a big factor in Jenner’s win, but many of his competitors were also highly skilled athletes. We can’t help but believe that the championship mindset of clear focus on the goal had a lot to do with his victory.

So, what about you? Do you have that gold medal mindset? How many times have you looked at your goals lately?

We’re not making any promises, but we do have a prediction…the more you focus on your goal, the more that goal appears on your radar screen, the more likely you are to achieve it.

We’re here to remind you to keep your eyes on the prize for your business and your life. Whatever that goal is, carry it with you in your pocket as you

Go forth and go great things,